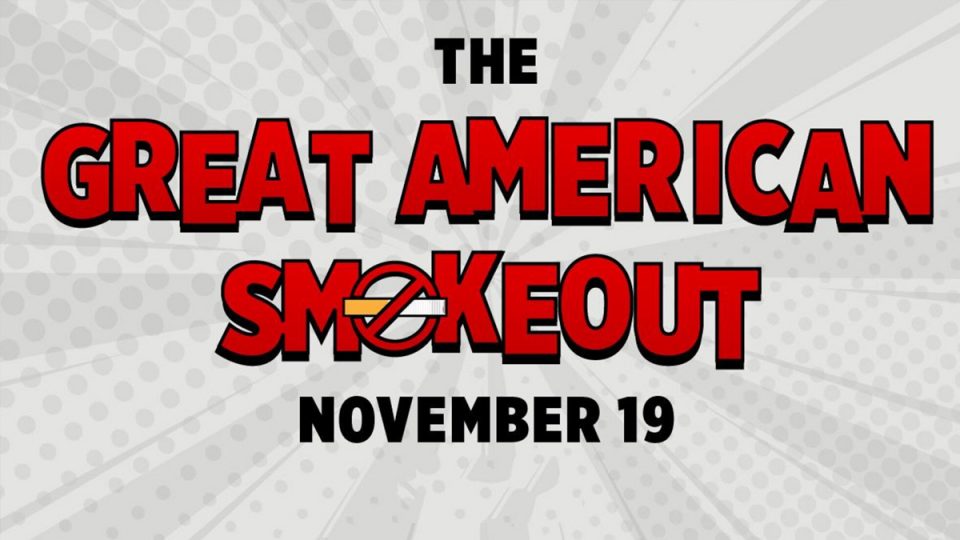 The American Cancer Society sponsors the Great American Smoke out on the third Thursday of November (November 17), challenging smokers to give up cigarettes for 24 hours. If you or a loved one smokes cigarettes, consider joining the movement, and take the first step toward quitting cigarettes forever!

The inception of the Great American Smoke out stems from a 1970 event in Randolph, Massachusetts. High school guidance counsellor Arthur P. Mullaney asked people to give up cigarettes for one Day and donate the money they would have spent on cigarettes to a high school scholarship fund. A few years later, in 1974, newspaper editor Lynn R. Smith led Minnesota’s first Don’t Smoke Day. The two efforts caught on, and on November 18, 1976, the California Division of the American Cancer Society got 1 million people to quit smoking for the Day. This marked the first official Smokeout before the American Cancer Society took it nationwide in 1977. As a result, there was a dramatic change in the public view of tobacco advertising and use. Many public establishments and workplaces are now smoke-free to protect non-smokers and support people trying to quit.
Every year the Great American Smokeout draws attention to preventing deaths and chronic illnesses caused by smoking. From the late 1980s to the 1990s, many state and local governments have raised cigarette taxes, limited promotions, discouraged teen cigarette use, and taken further action to counter smoking. States with strong tobacco control laws saw up to a 42% decrease in smoking in adults.
Though smoking rates have dropped, almost 38 million Americans still smoke tobacco, and about half of all smokers will encounter smoking-related deaths. Each year, more than 480,000 people in the United States die from a smoking-related illness, meaning smoking causes 1 out of 5 deaths in the US alone.

1983
A limit on smoking in the workplace
San Francisco was the first city to pass restrictions banning smoking in private workplaces.

How To Observe Great American Smokeout

Make a plan
Learn about options to curb cravings and get your support system ready to help you through hard times. If you’re trying to help someone else quit, check out some ways to ensure you’re doing it the right way.
Get rid of anything smoking-related
It’s the perfect day to remove all smoking-related items from your home. Remove all cigarettes, ashtrays, and lighters from your car and workplace. Also, consider stocking up on substitutes like gum and crunchy snacks.
Reflect on your smoking past
If you’ve tried to quit before, the Great American Smokeout is a good time to reflect on your past attempts. Think about why those attempts didn’t work, and go back to the drawing board for the next time.

4 Famous Ex-smokers You Never Knew Smoked At All

Gwyneth Paltrow
The Academy Award-winning actress frequently smoked as a teen and didn’t decide to quit until she was pregnant with her first child.
Barack Obama
The former president quit with the help of Nicorette gum, hoping to set a good example for his daughters.
Jennifer Aniston
The “Friends” star quit smoking successfully by turning to yoga and another exercise to keep her mind off cigarettes.
Mila Kunis
The actress admitted she used cigarettes to slim down for her role in “Black Swan,” but has since given up the habit.

Why Great American Smokeout Is Important

A single day can help people take the first step.
The Great American Smokeout highlights the dangers of smoking tobacco and provides a meaningful way for people to avoid cigarettes. It also offers a comfortable environment for family members and friends to speak about tobacco and how to quit smoking.
It brings people together.
Not only does the Great American Smokeout speak to the negative effects of smoking, but it also helps people come together in the name of quitting. People trying to stop can communicate with one another online using the hashtag #GreatAmericanSmokeout, or by attending local events in various cities.
It provides resources to quit.
The American Cancer Society’s Great American Smokeout website provides resources, news, and stories about the journey to quit smoking. Smokers can find inspiration and tips to increase their chances of quitting successfully.