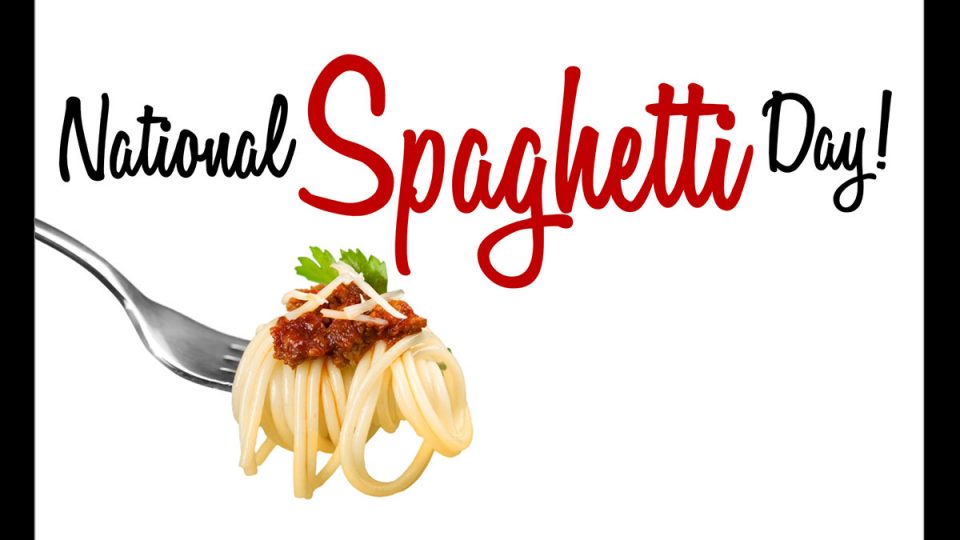 Though the origins of spaghetti are disputed—whether it was Marco Polo bringing back culinary invention from the East, an Arab trade-route delicacy, or a home-grown Sicilian treat dating back to the 12th Century—we can all agree that a cold night with a big bowl of noodle-y, saucy goodness is a balm for the soul. So join us on January 4 as we celebrate National Spaghetti Day with this fantastic dish!

When Is National Spaghetti Day 2023?

We can all agree that a big bowl of saucy noodles is a balm for the soul.

Pasta has four ingredients — water, eggs, wheat, and salt. The first dish made from pasta was in Sicily, dating back to 1154. According to historians, this recipe differed from the pasta we know today, resembling lasagna. Another significant difference was that it was cooked differently. That being said, there is no evidence of pasta after this until the 14th Century.

Another element that baffles historians is the exact origin of modern pasta. It is believed to have originated in Italy, but many are of the consensus that Marco Polo was the one to bring it back from his adventures in China, thus making China the original creator of pasta.

After it made its way to Italy, the locals started making pasta from hard wheat shaped into elongated strands. This is where modern-day spaghetti comes from, although the original was closer to vermicelli in terms of texture.

The word ‘spaghetti’ is derived from ‘Spago,’ meaning twine or string. Just like in Italy, spaghetti is cooked worldwide to “al dente,” which means that it is soft enough to be bitten easily and quite chewy.

Because of the chewy texture that is soft but firm, spaghetti can easily handle tomato sauce. So most spaghetti dishes are tossed in meaty tomato sauce and topped generously with freshly grated parmesan or Romano cheese.

1st century B.C.
An Ode to Pasta
The oldest recorded documentation of pasta is found in the writings of Roman poet Quintus Horatius Flaccus, referring to sheets of dough called Lagana.

1870
Pasta-abilities!
The combination of tomato juice and spaghetti is printed for the first time in Italian chef Francesco Leonardi’s cookbook “L’Apicio modern.”

Sweden Waffle Day A chance for the Swedish to celebrate their beloved waffles. March 25

Germany National Soup Day As the winter begins to set in, our friends in Germany get warmed up with a bowl of soup. November 19

Australia National Marshmallow Day A day for our Australian friends to enjoy toasted marshmallows and a cup of hot cocoa. May 18

Spaghetti By The Numbers

19th Century — the decade to which spaghetti in tomato sauce dates back.

Thirteen thousand seven hundred eighty pounds — the amount of pasta filled in a swimming pool by a restaurant in Los Angeles.

10-12 inches — the length spaghetti is primarily available in.

600 — the number of shapes pasta is available in.

5 Facts About Spaghetti To Make You Say, "Mamma Mia!"

Why We Love National Spaghetti Day